SRP is one of the fundamental object oriented software design principles, first introduced by Tom DeMarco in 1979.

In simple terms, SRP states that every class should have a single well defined goal, and that all members of that class (properties, methods, etc.) should work together to achieve that goal. Robert Martin puts it in slightly different terms:

There should never be more than one reason for a class to change.

Essentially SRP enforces the concept of high cohesion that should not only be applied to classes but also internals of a class, such as methods.

While SRP is quite easy to understand, it’s not always logical to implement. Consider the following class: 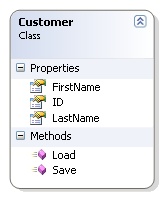 Given the convenience of having a customer class that is smart enough to know how to load and save itself, would you rather break it out like this?:

According to SRP, you should, because the combined customer class shares multiple responsibilities: customer business logic, and customer persistence logic. In fact if you use TDD, you may even be forced to separate these two responsibilities.

In practicality, however, while we should keep this principle in mind and try to apply it wherever it makes sense, we should never get so carried away that we start introducing other design smells in our architecture, such as Rigidity, Viscosity, and Needless Complexity.

Modify reality with #artificialinteligence and #machinelearning

Looks good. Definitely on my list of cool tools to check out.

Very nice. Such a timesaver!

STAY UP TO DATE

Subscribe to the Software Rockstar Newsletter to Occasionally Receive My Best Articles in Your Inbox.